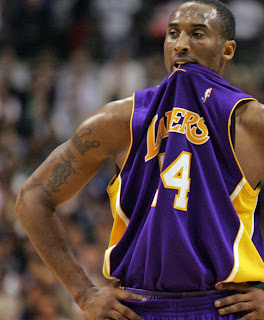 Kobe Bryant is the most popular basketball player and gifted since Michael Jordan retired. Kobe was born in the United States, but he spent his childhood in Italy, where his father played professional basketball player. He loves football and a big fan of AC Milan. Back in the United States he began his career as a basketball player, was hired by Los Angeles Lakers won the NBA championship and breaking several records. He is now considered on of the top ten players ever in NBA history. However, Kobe Bryant has nothing to do with the tattoo of his favorite sports. His tattoo on the life and beliefs.

The story behind the tattoo Kobe Bryant is quite interesting.

In the summer of 2003, in Eagle, Colorado, Kobe met Katelyn Faber, 19-year-old - the second most important woman in his life.

Some time after meeting with the Kobe Bryant sexual assault sued and arrested. He admitted adulterous sexual relationship, but denied allegations he raped.

No one knows what really happened that night in Colorado, anyways they could find some kind of (economic) agreement that allows Kobe to continue the fantastic basketball career.

Far more difficult is to find a deal first with the most significant woman in his life: his wife Vanessa. Someone talked about the 4 million dollar ring as an apology for the "minor incident in Colorado". What is certain is that after the trouble in Colorado some tattoos appeared on Kobe's arm. Vanessa's name and the Crown to represent the main interests of his wife, two wings of angels and the inscription Psalm XVII to express her faith.

He also has a daughter Natalia Diamante's name tattooed on his left arm.

So remember, if you've caught your wife cheating, with a 4 million dollar ring and a big tattoo on your arm, you should be fine. 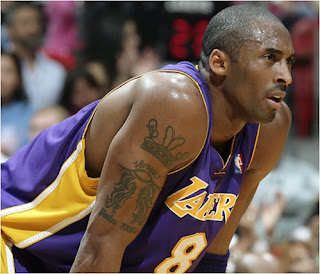